Literally translated, blockchain is a chain of blocks.

Blocks are data about transactions and transactions within the system, represented in a cryptographic form. All blocks are arranged in a chain, that is, they are interconnected.

Blockchain can be described as a database that stores all cryptocurrency movements across wallets and information about all the wallets that have ever existed. All of this is specially encrypted to create linked blocks and copied across millions of miners' computers.

Nothing can be changed in a block, as it would have to be changed in the next block as well, and so on to the end of the entire chain.

Miners are engaged in mining, namely in mining cryptocurrencies. Miners are people who, using special equipment, check transactions, confirm them, write them into a block and create a new one.

(Miners are in charge of finding new blocks and are rewarded for this).

Mining is a type of activity to mine a new cryptocurrency using special equipment connected to a computer and a pool. It provides infrastructure and security for the entire blockchain.

Miners give away the processing power of their devices and receive a cash reward for each new block. For example, in the Bitcoin blockchain, the reward per block, in 2022 is 6.25 BTC.

How do miners mine cryptocurrency

Initially, it was possible to mine bitcoin even on an ordinary processor or laptop. Then the complexity increased, there was more competition, and had to use additional power in the form of GPUs, which produced a much higher hashing speed with fairly good energy efficiency and a reasonable price for the devices themselves.

However, the complexity of bitcoin mining, competition, and the price increased by several hundred times, and it was necessary to use even more powerful equipment - asics.

Asics are powerful devices, used for one specific action, for example, for BTC or LTC mining (for each cryptocurrency you need to select different Asics).

At first, miners could buy their own equipment (Asics), start mining by themselves, and take all the rewards for themselves. However, now it is simply impossible to mine btc and catch a block on its own.

Therefore, miners began to unite in groups (pools) and divide the mined bitcoins according to their capacity.

A mining pool is a site that combines all of the miners' power to increase the probability of finding a Block. The reward for the block mined by the pool is distributed among all participants according to their mining algorithm.

The principle of mining in a pool is not different from mining alone - a block is found by one miner out of many connected to the pool. But the search for that block is done by all the miners in the pool.

In order to determine each miner's contribution to the work and correctly calculate their reward, a stratum protocol was created. This protocol is used to issue tasks to miners to calculate the block, but only with reduced complexity. As soon as the miner finds a solution with a difficulty higher than the set one, the solution is sent to the pool. This is called a share* - essentially a small block. It can also be a balloon with a complexity higher than the network complexity, in which case it will be a block solution. The pool calculates each miner's contribution by the number of orbs sent and their complexity.

The criteria for selecting a mining pool

The top mining pools (BTC as an example)

You can choose the best pool for mining in 2022 on our website or at: 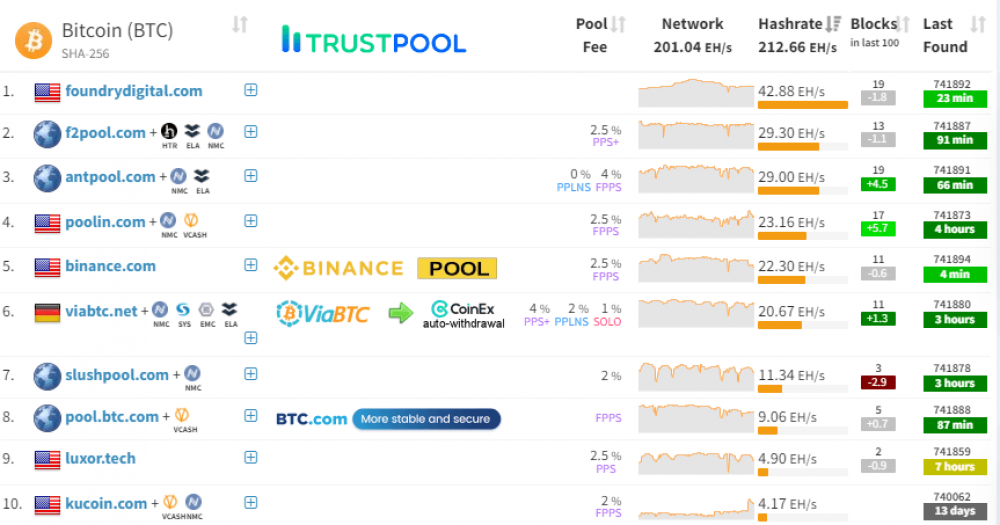 It is possible to mine cryptocurrency using asics and GPUs (video cards). These devices perform the same functions, but they have huge differences. Each has its own advantages and disadvantages.

Asic is a powerful processor. It is used to solve a specific task and is sharpened to a certain algorithm of actions. An asic has higher processing power than a video card and has more options for mining cryptocurrencies.

Each asic is customized for a specific mining algorithm. This is why it is important to choose an asic that will fit the algorithm of the coin you are going to mine.

Asic is used to mine bitcoin and other sha 256 coins; Lightcoin and Dogecoin, Scrypt coins; Monero, Cryptonight coins; and Dash, X11 coins.

Graphics card (GPU) – small hardware, sharpened for solving a lot of tasks. Computing power is not as high as attics, that is why you can not mine bitcoins with video cards (not enough power). GPUs are usually used for mining ether and other currencies on the Ethash algorithm.

The main difference between these devices is the different processing power and mining of different cryptocurrencies (an asic mines one cryptocurrency, a video card mines another).

If you choose a GPU, you can opt for:

Tom Asics for bitcoin mining in 2022

(Suitable for cryptocurrencies with x11 algorithm).

(Suitable for cryptocurrencies with Blake256 algorithm).

In order to start mining you need