According to the work results in Q3, the net loss of Bitfarms reached $85 million. In the background of the previous reporting period, where the figure was equal to $142 million, the trend looks positive. The company announced it on its Twitter. 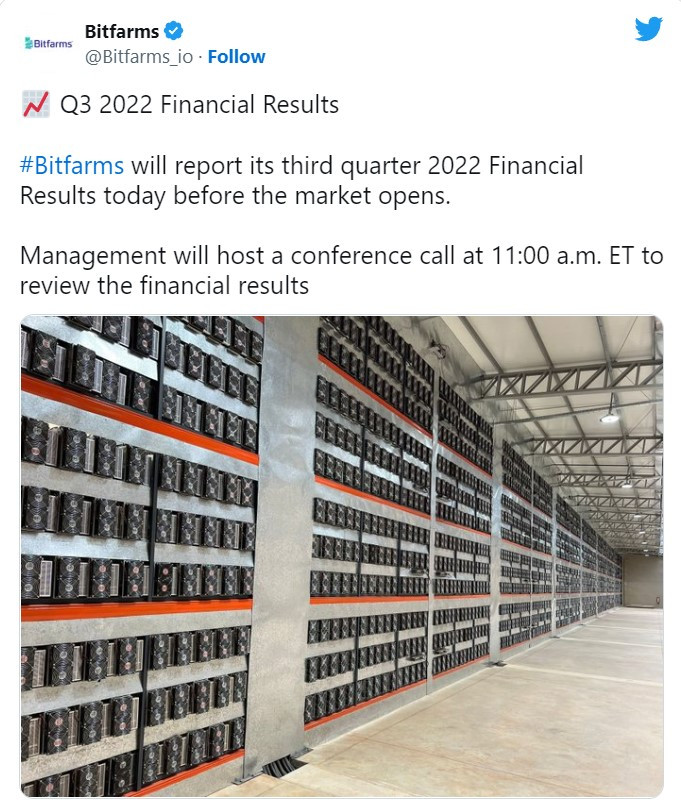 The reason for the negative results was the revaluation of reserves in cryptocurrency and sold digital assets. According to the report, the operating profit amount reached $10 million.

Bitfarms managed to mine 1,515 BTC in three months. The cost per coin was at the level of $14.3 thousand, which is 16% lower than in the previous reporting period.

In June, the company decided not to adhere to the accumulation strategy. According to CFO Jeff Lucas:

The company continues to work to maintain financial strength, so when the value of BTC declined, the amount of borrowed capital was reduced. Since June, $94 million has been paid off, including the repayment of high-interest loans.

During Q3, Bitfarms installed 7,000 miners and also increased its hashrate by 17%.

Share to:
Related news
There is a rush of BTC miners in the market

Experts note a record level of activity by miners selling coins. During the three weeks of November, the activity grew by 400%. Glassnode informs that the balance of BTC miners...

Read all
Riot and CleanSpark increased hashrate in September

Riot, a Texas-based BTC miner, not only recorded a 16.7% increase in hashrate but also intends to expand its facility, based in Winstone. The Riot also sold 300 BTC. According...

Read all
Transition to blockchain ETC will save from 51% attack

There is an opinion in the cryptosphere that turning to mining in ETC blockchain will cut the risks of 51% attack. Remind that two years ago such attacks happened three times an...

Read all
What happen to hashrate while miners sell tokens out

A year ago miners faced the first serious problem – the pressure from China's authorities. That day they had to relocate and look for a new shelter where they could work safely....

Read all
Miners sell out BTC on the stock

In two days Glassnode fixed the high activity of selling BTC that reached 9476 tokens and became the biggest in the 7 month period. Experts said that this is the result of trade...

Read all
If you are a specialist in mining

Despite all the problems, the blockchain industry continues to increase. It means that it can offer new vacancies and specialities. Probably, it’s the only field now where you c...

Read all
Prospects for regulating mining in Russia

Crypto mining is the process of mining virtual coins. In some sources, this term also implies the enforcement of order, security in the blockchain (they started using it to phar...